Draw Mohammad Competition has been cancelled .

Pakistani protesters shout slogans during a protest against the planned anti-Islam cartoon competitions, in Karachi, Pakistan, Wednesday, Aug. 29, 2018. Thousands of Islamists in Pakistan launched a march in Lahore toward the capital on Wednesday to protest a far-right Dutch lawmaker’s plans to hold a Prophet Muhammad cartoon contest later this year. (Fareed Khan/Associated Press)

THE HAGUE, Netherlands — The Latest on a cartoon contest in the Netherlands that has offended Muslims (all times local):

In a written statement issued Thursday night, Wilders said “to avoid the risk of victims of Islamic violence, I have decided not to let the cartoon contest go ahead.”

Wilders, who has for years lived under round-the-clock protection because of death threats sparked by his fierce anti-Islam rhetoric, said he does not want others endangered by the contest he planned for November.

The contest was to have been held at the tightly guarded offices of his Party for Freedom in the Dutch parliament building.

It was the subject of protests in Pakistan on Wednesday.

A Dutch judge is extending by two weeks the detention of a 26-year-old man who allegedly threatened to attack the organizer of a Prophet Muhammad cartoon contest.

Prosecutors said in a statement Thursday that an investigating judge ordered the suspect held while he is investigated on charges of making a terrorist threat, making preparations for a terrorist murder and incitement.

The man, reportedly a Pakistani citizen, was arrested Tuesday in The Hague on suspicion of terror offenses after he allegedly posted the threat, in Urdu, on Facebook a day earlier. Prosecutors say he was not armed.

The upcoming contest is being organized by anti-Islam lawmaker Geert Wilders. It has sparked protests in Pakistan. Physical depictions of the prophet are forbidden in Islam and deeply offensive to Muslims.

Copyright 2018 The Associated Press. All rights reserved. This material may not be published, broadcast, rewritten or redistributed. 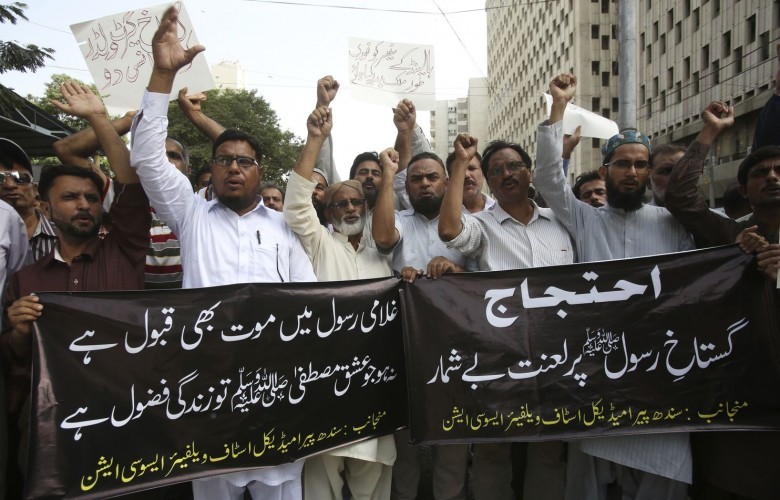 Draw Mohammad Competition has been cancelled .